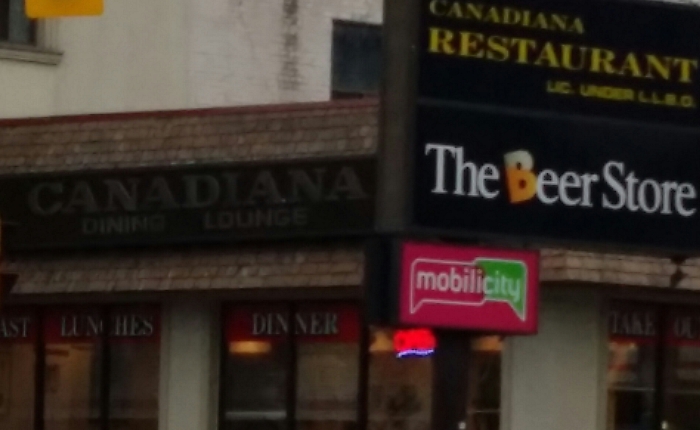 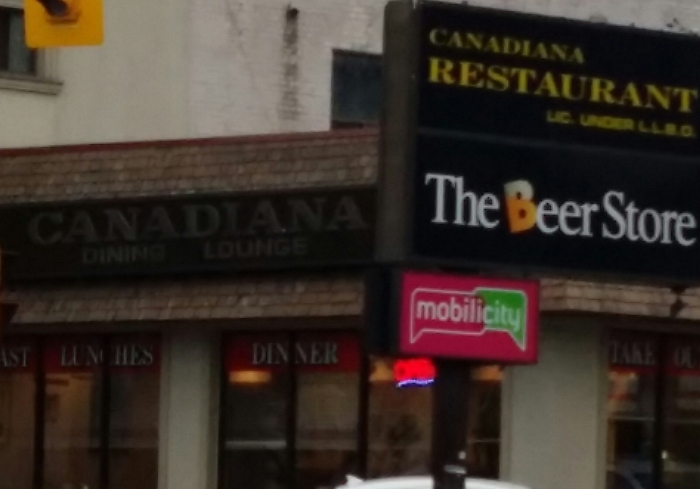 Weekends are for adventuring, specifically trying out new brunch locations.

This past weekend I convinced a friend to go for a walk to my favourite coffee shop.  I like to think he wanted to spend time walking, talking, looking at all the houses we pass but I know the real motivation for his joining me was to try out a new brunch location he’d spied a few weeks back.

The exterior of the restaurant is dark, hidden behind a few signs from other stores.  If I was to describe it in one word I’d say it looks = shady.  After seeing multiple coppers on multiple days dine at the little place, we decided to give it a try.  At least we’d be “safe”.

Turns out it was to be one of the more stressful eating experiences of my life. It wasn’t a fear-for-my-life experience like the other place I’d tried once and the Hispanic guy was yelling at the Caucasian woman about what he perceived to be her eight year-old son’s racist stares, “do you want me to go out to the trunk of my car and come back in?!”  At which point I left the restaurant – that morning I wasn’t in the mood to see blood spatter.

It was stressful in another way.

The interior of the restaurant had the appearance of an old 70’s diner. A stucco ceiling, exposed beams painted brown complete with a bar that included a polished brass foot rest.  There are two distinct rooms, divided by a half wall and window-like spaces.  The front half is mostly bright from the front windows; the back half of the diner is darker with light filtering over the half wall.

We were seated in the back half of the diner, right outside the kitchen, in front of the bar and the pass station.

There are four ladies on duty.

–        Two seasoned staff members who spent a significant amount of their time running around heckling the co-owner with random outburst such as, “well at least I didn’t kill the boss; I just hurt him so he can still pay us our wages!”

–        One newbie who was running around silently, filling up coffee mugs and shuttling plates back and forth throughout the restaurant.

After being seated for 15 minutes our order was taken by one of the more seasoned ladies.

Once our order was taken, she moved to the next table, leaned towards the seated bleached-haired lady and scolded, “I told you your food was going to take 30 minutes minimum . Let that be your expectation, I don’t want to hear any more complaints!”

We should have known right? But we stayed seated.

Good thing we’d overheard our server or else perhaps we would have been getting a little anxious ourselves. Leaning back in my chair, I to peeked into the kitchen….no wonder it took 30 minutes a plate, they were cooking each egg in its own frying pan!  Amusing.

Not everyone in the restaurant had our service knowledge.  Too bad because their expectations were just too high for this place and they up and left after waiting 30 minutes for their food.

It was the newbies table!  What to do?  The customers just UP and LEFT.  What was she supposed to do?  She was panicking, running up and down her aisle of tables at the front of the restaurant, yelling towards the two seasoned waitresses in the back.

“The food is on the table,” she shrieked.

“Who’s going to pay for their food,” the seasoned lady replied to the non-question.

“The food, the food, I’ve put it on their table,” the newbie’s voice went up an octave.

“Just take it back to the kitchen and have someone else buy it,” barked one of the seasoned ladies.  Apparently this restaurant doesn’t believe in food hold time or in safe food handling practices.

The new lady didn’t follow the instructions and instead continued to flap up and down the aisle, fretting about who was going to pay for the food.  She ran outside to see if the customers were outside smoking, they were long gone.  I don’t know what happened to the food.

Thankfully we’d already received our breakfast – but not the food we’d ordered.

When my friend pointed this out to our server, she took his plate off our table, went back to the kitchen where we overhear her sarcastically inquire, “Does this look like Sunny Side up to you!!!”

The cook said something in return and out she flew from the kitchen, back to our table.

She slid the same plate back in front of him and said, “It’s not what you ordered but its good enough to eat.” And away she went..

I do not suggest CANADIANA to anyone except perhaps coppers who likely get their breakfast for free!

One thought on “Breakfast at CANADIANA”