The things we’ll do for friends! It was a friend’s birthday yesterday and her wish was to go exploring. The destination? Nashville North.

Like most folks south of Highway 7, we knew about the existence of Nashville North wondered what it was like and if it was anything close to a country bar in Nashville but never ventured out to investigate.

A birthday is the best excuse to journey out and have a looksee. Five of us piled into the car for an evening of discovery.

I left the real Stetson at home (why do I have one you ask?! haha) and opted for my “curious” hat, it seemed more appropriate for such a curious adventure.

Now we did have a strategy going in. One must always have an exit plan! We decided on an early-ish dinner reservation so that an early departure wouldn’t seem so pre-mature. We arrived only to find out the reservation had been lost?

“You might not be able to eat here we are booked with reservations coming at 7, 7:30, 8, 8:30 and 9 and we might not be able to fit you in. I mean if all else fails we’ll pull up a table in the bar area but that’s kind of unlikely, but I’ll go look. If I can’t get you in, there is a Boston pizza just down the road.”

Seriously!?!? We did our diligence in booking a reservations, invested 22 minutes of driving (the website is pretty accurate on this) to come visit this place and by golly it’s our friends birthday how can you deny us!

Turns out the manager worked a miracle and voila a table for 5. I just have to mention this because it was a little funny. Not only was there a table for us, there were many many empty tables that never did get filled up so we do wonder at all the dinner reservations that were rhymed off. Needless to say, we weren’t offended and accept the fact that perhaps we were a little uptight and it’s understandable that they may have been concerned we might ruin the mood. If I was a business owner I may have been concerned too! 🙂

So we made it to a table, we’d overcome the first hurdle. 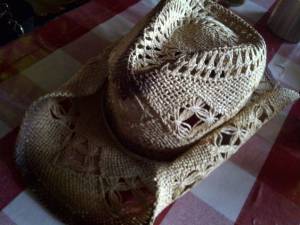 The second hurdle was convincing our waitress that infact we had been given this table to hopefully enjoy some food.

“Did you guys have a reservation?”

“We did but it got lost, but the kind gentleman found us this table.”

“But did you have a reservation?”

“We did yes it was lost and now we are here at this table, the man over there seated us here.”

“But you don’t really have a reservation.”

“Ummmmmmmm, we did but it was lost and the gentleman over there fit us in? Perhaps you should talk to him about it?”

“Ok, maybe you should talk to him about it and if there is a problem, we would be more than happy to oblige to whatever alternate arrangements need to be made – we can always go to the Boston pizza down the street?”

And off she disappeared only to reappear with more questions. No problem, we like this game now.

“Ummmmm…we think so.” But now we aren’t so sure! They said they have food on their website and the man on the other end of the phone who took our reservation that got lost said they served food too. We are thoroughly confused, where are we?!?!

She dashed off and found us menus. We had our food and put our feet up to watch…line dancing.

Turns out the place isn’t quite like a bar in Nashville, there are elements that are similar but with Canadian flavour.

I admit it was a little awkward watching line dancing to club music? but apparently it is possible to line dance to club music and they are pretty darn good at it too. Infact so good that we even had our own private show to some kinky moves by one unlikely zealous gentleman!

Besides every third song being a club mix for example, Maroon 5’s “Moves Like Jagger”, we did hear a fair share of country tunes. I admit when I have access to XM radio I have been known to pre-set one of the stations to channel 59 – “Highway”. You can guess its country music so I did know a few country songs 🙂

We did try our line dancing moves out, became royally confused at which way to step, turn, stomp! and settled for people watching.

Did you know that bumping and grinding to Shania Twain’s song “Up” is pretty popular? Not Maroon 5’s “Moves Like Jagger” but Shania Twain?!?! Who knew!! I mean it’s a happy song but never thought it to invoke such emotions or moves.

It turned out to be a pretty funny evening. Perhaps maybe not one that could ever be re-created the way it all turned out, but Nashville North was worth the 22 minute drive and lost reservation. Like any perfect adventure, it has a story and good memories that make me laugh.

The birthday girl did exclaim at one point

“What happened to my friends?”

What happened is we were confused, trying to figure out how to fit in to a new environment and enjoy it and well we were doing our best to experience that ‘ole country feeling and maybe, just maybe, for a minute we lost our uptightness just a little!

3 thoughts on ““She thinks my tractor’s sexy…””