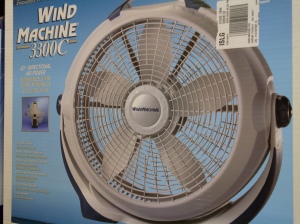 What a productive day! It has been over 2 years since I have owned a fan and well, today I made the decision to purchase a new one. I was tempted by the Wind Machine 3300, it does looks fairly aggressive and would do the job, but I feel that my new Blizzard fan will suffice.

Now you are all wondering what could my double-first possibly be, well it is a little bit like a syndrome that needs plenty of explaining and believe me, this is not the forum to adequately clarify, suffice it to say double-first means double the crazy. My double-first and I spent Sunday doing not a lot of anything besides reminiscing about past adventures.

One particular adventure I’d like to share is the Hilda Street adventure. I can only imagine those looking through the glass at our disconnected situation and saying “those poor girls…” but instead I look back and say “where were their parents hahaha” Well we all know where their parents were…likely in the dark 🙂 but isn’t that where parents are a lot of the times when we first leave home looking for adventure and a place to spread our wings (and hopefully not come crashing down).

We were poor new graduates and student, living in a dark basement (it does sound like a prison already) but inside our prison the walls were painted bright yellow and some other colour I can’t remember. There were three of us tucked into the basement, joy-riding on the weekends and being responsible young adults during the week.

One fine night on our way home from someplace important, we caught sight of our neighbours old couches on the curb side – obviously put there for (I can’t believe I am admitting this!) garbage pick-up. You see we didn’t have any couches in our fine basement apartment, the 4th house mate up and got married?! and took her furniture back to the store where she’d bought it one year prior. Folks it is possible to return almost anything!! The floral loveseat and couch looked pretty appealing in our situation.

Between a cement floor and padding for our buttocks, well let’s just say the padding won out. I admit I can’t remember all the details clearly, but we secured the love seat and were ready to dash back across the road to get the couch when the folks decided to open their front door. We likely were making a racket, giggling and whispering loudly about our covert operation that wasn’t so covert at all.

As soon as that door swung open, we scampered away from the light and behind cars parked on the street. Can you envision three heads poking up from the hood of a car checking to make sure the coast was clear?! That was us. When the door shut we counted to 10 and rescued the couch.

Now the couch was pretty long, it was like an extended version of a normal length couch and getting it down the stairs and around the corner to our lovely living room was a bit of a challenge. If I recall correctly we did take out some drywall on the way down the stairs. 🙂

Our couches turned out to be great finds, they travelled to a new apartment and eventually found their way to the…garbage. Who knows, we never stood vigil with the couches at the back of our building when we did part ways, they may have been rescued a second time to a third, fourth, fifth loving home!

4 thoughts on “Sunday With My Double-First”